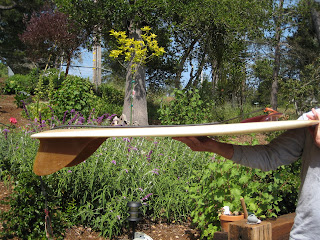 With all the interest in Simmons hydrodynamics,hulls,and alternative surf vehicles of any and all stripe..I thought to throw this in the mix... 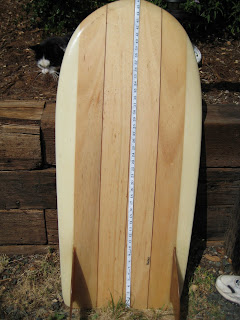 What you see here is a hydrodynamically sophisticated, potentially lethal (in the right hands), planning foil of ancient origin..created..from glue up ( foam,balsa, redwood), shape, and glassing...by Gordon Theisz. 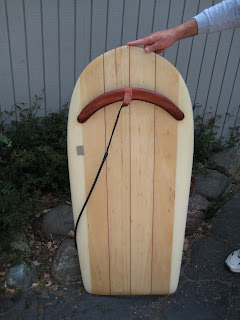 This is one of a handful shaped by Gordon in the 70's thru mid 80's for himself and his surfing partner and test pilot extraordinnaire..Candy Calhoun.
They both lived in the same Central Coast town as me..and I first became aware of them early 70's ..usually surfing obscure..niche spots, by themselves..and was immediately blown away by the..speed . that these guys got on any size wave.
Gordon was a shaper from way back for Wardy Surfboards...and Candys' surfing pedigree..and exploits have been documented elsewhere.
Sufficient to say, she has an intense..highly focussed personality..and would go through cycles of full blown committment to her surfing, followed by periods of years where other interests would take over..and surfing didn't exist.
She disappeared from local waters mid 70's..and re-appeared about 1980 with a real vengeance.Thats when my wife and I became her surfing partners for the next year or so..and we were able to witness up close and personal an absolute one of a kind surfing approach and mastery. 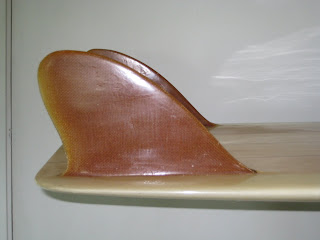 If a criteria for" good surfing' is speed, tight manoevers in the curl,and barrel riding...then I can say that in 1980-81...I considered Calhoun to be maybe the best in the world.

To this day..with the exception of kite boarders and tow assisted stand up...I have never seen anyone go so damn fast, ride deeper, or throw the most ridiculous, surreal, roundhouse cutbacks...board in front, body following and holding on only to the redwood handle.
On top of that, she would go out in the most extreme conditions..and more than once shamed me with her lack of fear and or common sense.God knows what she would have done at a good point break like say..6-8ft Malibu or Burleigh.... 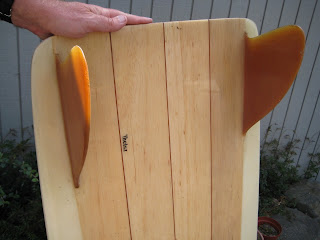 There ya' go...a unique and timelessly functional craft..designed for a singular personality...
glad I was able to see it in action.

Note; You can find more writings and posts by the Dr. on the Campbell related blog Transafixion.