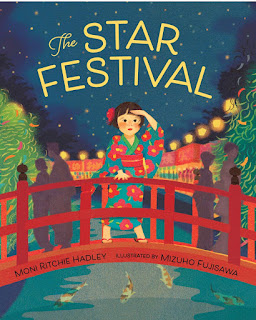 Tanabata Matsuri, the Star Festival, celebrates a popular folktale: The Emperor of the Heavens separates his daughter, Orihime, from her love, Hikoboshi, all year―but on this day the two stars finally reunite on a bridge across the Milky Way. For Keiko, her mama, and her grandmother, Tanabata is about making tanzaku wishes, taking in the colorful decorations, and eating delicious food like nagashi somen and shaved ice. But when Obasaan gets lost in the crowd, Keiko and Mama must make their own bridge to find her again―and see if their tanzaku comes true.

Moni Ritchie Hadley is a children’s author based in California who has been published in Highlights magazine. She has a psychology degree from UCLA and is a former home and hospital teacher. The Star Festival is her debut picture book.

Mizuho Fujisawa was born and raised in Japan near Mount Fuji. After studying biology, she moved to France with her family to pursue a career in illustration. She lives in France.

Tom Morey Boogie Board and a bit more...